From the field: A case study of the Romeo Dallaire Child Soldiers Initiative

The UN Secretary-General will release the Annual Report on Children and Armed Conflict to the Security Council this month. It will be noted that serious challenges to the protection of children affected by armed conflict continue to persist. Attacks on children’s well being that range from abductions, to attacks on schools and hospitals, to the recruitment and use of children and the direct killing and maiming of children have all been key features of the conflicts that currently exist. Flagrant violations of the laws of war as well as human rights law by parties to war, which include governments, are unfortunately common features that directly impact our children.

So, how do we attempt to address this horrific reality? We at the Romeo Dallaire Child Soldiers Initiative are committed to seeing a world in which children are no longer used as weapons of war. This requires not only lofty goals defined by international legal norms, but a concerted effort to find practical, tangible, solutions that are at their very heart, prevention-oriented. It means challenging our past practices and being honest about the failures that persist.

In 1992, the International Labour Organization (ILO) began a noble effort to progressively eliminate the problem of child labour. It aims to strengthen the capacity of countries to deal with the phenomenon and catalyse a powerful global movement. The Dallaire Initiative, in line with this approach of the ILO, believes that progressive elimination of the recruitment and use of child soldiers should be employed to realise the ultimate goal to end this practice. This means that we recognize that we will have to work in a country by country manner and it also recognizes that we may have more success in dealing with the youngest, most vulnerable children first. We understand from research that the youngest children are the ones most affected by trauma that is experienced and the harder those children are to rehabilitate in the long-term.

We also recognise that long-term systemic change is required for meaningful adherence to child protection. There are no quick fixes to this problem.

In November 2015, General Dallaire and I went on a mission to South Sudan, at the invitation of UNICEF. The aim of this trip was to specifically focus on identifying areas where engagement with armed forces and groups could take place in relation to their accountability to their current peace agreement and more especially as it relates to the recruitment and use of child soldiers. A series of high-level meetings with various government and SPLA representatives, along with key civil society organisations, and UN members took place in Juba. 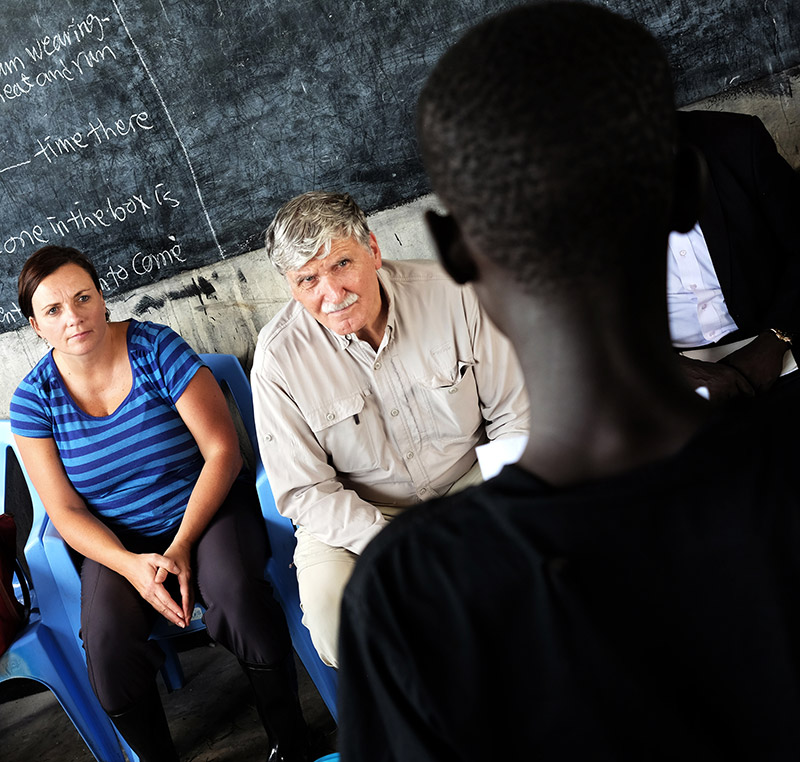 Prior to this trip, there were many naysayers, often remarking that South Sudan is too far gone after the conflict that erupted in December 2013 to be able to do anything to affect change. General Dallaire and I both felt that there is always potential to do something positive. In particular, the combination of the Dallaire Initiative approach to speak the language of the security sector and to understand their very real challenges, to understand how to employ diplomacy within difficult contexts, and yet keep the focus very clearly on prioritizing children’s wellbeing had potential for creating entry points for discussion and possible action.

Examples of this approach were exemplified in meetings with the South Sudanese Minister of Defence and the Chief of Defence Staff for the Sudanese People’s Liberation Army (SPLA). In these meetings, both men discussed and opened up about the challenges the SPLA face in terms of ending the use of children as soldiers. General Dallaire and I took an approach in which, instead of pointing fingers, we asked them for their opinions on why these challenges exist and how could we assist with their professionalization of their military, which would entail ending the use of child soldiers. The discussions resonated with the SPLA and resulted in agreement to give a 2 hour briefing to 40 SPLA senior officers two days later. Within this briefing, the SPLA officers were very candid and the pedagogical approaches employed by the Dallaire Initiative, allowed for such discussion to occur. They understood the realities of the impact of the use of child soldiers not only on the children, but on the families, communities and the future of the country. This allowed for discussion to begin on how we change this situation so that we are breaking the cycle of recruitment and use of children.

In another example, General Dallaire and I travelled to Pibor district to meet with the Cobra Faction, and internal opposition group, to discuss their release of the last 250 children within their armed group. The meeting of General to Generals was an incredibly important factor to the success of the final outcome. The Cobra Faction agreed and signed a declaration, within a public forum, to commit to the release of these 250 children.

At the same time on the trip to Pibor, we took the opportunity to meet children who had been recently released from the Cobra Faction. Many people in the community had concerns over the economic situation that results in children having difficulty in finding food and how this impacts their desire to join the armed groups. As I talked with the children in an open discussion, many talked about their wish to become pilots. Pibor is an area that can only be accessed by helicopters, and for many of the children being a pilot symbolizes access to opportunities and resources.

In a small discussion that I led with approximately 10-12 children that had been recently released, I wanted to hear more from the children on their concerns, their hopes and dreams. At that moment, I took out a tool we created at the Dallaire Initiative, a deck of playing cards that has messaging related to preventing the use of children as soldiers and cartoon illustrations on each card. This tool was intended, when designed, to be used by military who had been trained by the Dallaire Initiative, to remind them of the key messages they would be taught as they are deployed to peacekeeping missions and have downtime. However, in this instance I was curious to see the reaction of the children to the cards. The children were fascinated and started to point to the roles of child soldiers that are highlighted on the cards, stating, “that was my role.” It led to an opening up of discussion by the children that the educators at the school had not witnessed with previous approaches. Following on from this experience, the educators then contacted me a month later requesting that I send more decks of the cards to the school as the children were often asking to play with the cards and they became a psycho-social tool for the educators.

At the Dallaire Initiative, we believe in the power of collaboration with other NGOs, governments, communities, and UN agencies all for one common purpose – to develop better methods for protecting children. During this trip to South Sudan, it became clear that there were gaps that could be filled by the Dallaire Initiative and new approaches that could be explored. It is our hope that our current efforts to secure funding to return will be met with success.

*Dr Shelly Whitman is the Executive Director at the Romeo Dallaire Child Soldiers Initiative. Her research interests have been broadly focused on issues related to peace, development and human security. She has published widely on topics from sexual violence as a weapon of war, to small arms and light weapons, the international criminal court and various perspectives on preventing the use of children in armed conflict.

The Romeo Dallaire Child Soldiers Initiative was invited to participate at the Childhood Violence, Fragile Societies: The Case for Investing in Violence Prevention, a side event organised by Know Violence in Childhood in collaboration with partners at the World Bank Group’s Fragility, Conflict and Violence Forum on 3 March 2016. This blog post is an extension of the discussion.