Children at the heart of armed conflict

Children in a school in Afghanistan. Children caught in conflicts do not just lose out on years of schooling but are actively pushed into the workforce at a young age. AFP

Consequences of conflict on children are manifold, be it as observers, participants or targets. Their vulnerability leads them to being subjected to homicide, violent discipline and abuse of all kind

The pre-meditated murder of over a 100 children in an armed attack on a military school in Peshawar in December last year shocked the world. Images of children filling Gaza hospitals during the shelling of Palestinian villages and towns last year invoked a similar sense of outrage and despair. Boko Haram conducted a widely reported attack on a school in North-eastern Nigeria leading to over 200 girls being abducted to serve as “brides” for their cadres. In many ways, 2014 showed to the world the ugliest side of human nature.

It is important to acknowledge at the outset that violence experienced during armed conflict is at one egregious and extreme end of the spectrum of violence that is encountered and endured by millions of children. Children are not only vulnerable to attack during extreme conflict situations. Children’s vulnerability leads to them being subjected to homicide, violent discipline and abuse of all kinds even outside of conflict situations. Much of this is “hidden in plain sight” as a 2014 UNICEF report aptly reports. This report notes that homicide is a leading cause of preventable injury and death amongst children, especially boys, particularly in the second decade of their lives. Violence as a tool of “discipline” is a significant aspect of the daily lives of children worldwide.

Recent assessments suggest that civilians, and amongst them children, are increasingly casualties of armed conflicts. Estimates from almost a decade ago, cited in the Graca Machel report: Children and Conflict in a Changing World, published in 2009, suggest that more than 1 billion children under the age of 18 were living in areas in conflict or emerging from war, 300 million of whom were under age five, with a further 18 million children internally displaced or refugees. The changing nature of warfare, however, makes the scale and impacts of conflict hard to estimate.

Major inter-state armed conflicts are observed to be on the decline, yet there are intractable and prolonged conflicts within states and across borders, increasingly involving a variety of non-state actors. The Machel report cited above also noted both that armed conflict had become both fluid and less easily defined than previously, with armed groups moving between criminal and political activities, and that strategies adopted by such groups deliberately and systematically engaged civilians more directly.

Motivations are often linked to resources and opportunism. Indeed, the spectrum of armed conflicts today cover a wide span, ranging from the street — in the form of gang violence — to entire communities and countries drawn into brutal civil conflicts in several parts of the world. This presents a significant challenge to accountability, with even states using paramilitary and proxy forces to deal with armed conflict.

Humanitarian law has over time established basic principles to ensure children are protected during conflict, and the UN Secretary-General’s Special Representative on Children and Armed Conflict has identified six “grave violations” which are experienced by children. These include the recruitment and use of children during conflict, an under-reported but disturbingly prevalent issue; the killing or maiming of children; sexual violence and their abduction. Alongside are two equally important and interlinked violations which impact children disproportionately: attacks against schools and hospitals, and the denial of humanitarian access.

Reports from around the world in 2014 have demonstrated that all of these grave violations have occurred in some form or another, in some place or another. The Special Representative on Children and Armed Conflict noted in a report to the UN General Assembly’s 68th session last year that over 4,000 children were recorded to be recruited directly into combat in 2013; and this, of course, is also known to be a huge underestimate.

Take the case of Afghanistan as an example, where children were found to be not just recruited as soldiers but also detained in juvenile centres for indirect involvement (including as couriers and messengers), increasing their vulnerability to further abuse whilst in detention. Add up the numbers in conflict-affected situations in Syria, the Democratic Republic of Congo and Central African Republic amongst others, and the totals are staggering.

Conflict has long-lasting impacts on societies, the aftermath of which entails decades of rebuilding — economic, social, physical and, most importantly, psychological. The killing of children is seen as a symbol of the terrible depths to which conflict, whatever its source, can drag humanity. The consequences of conflict on children — whether as observer, participant or target — beyond loss of life, are increasingly well-understood to include not just the loss of livelihood and home, but the far more entrenched psychological effects of trauma.

Studies of children in refugee camps reveal pervasive effects of depression, anxiety, grief, fear and resentment. The destruction of the social fabric of communities, the direct witnessing of death and dismemberment, negotiation of conflict zones on the way to school, and the experience of impoverishment and deterioration in basic services — all these impact on children’s lives in multiple ways. Conflict-affected societies tend to remain poor and under-developed for longer than their more peaceful neighbours, and require concerted effort, as in the case of Rwanda, post-genocide, to get development processes back on track. Children caught in conflicts do not just lose out on years of schooling but are actively pushed into the workforce at young ages, thereby perpetuating child labour.

Worldwide, the development of jurisprudence and focus on protecting children within conflict has led to increased monitoring and reporting from conflict-affected countries on measures to ensure that children are not affected. Eight conflict-affected countries have signed up to cooperate with a UN global campaign called “Children, Not Soldiers,” that aims to end the recruitment and use of children by Government security forces in conflict by the end of 2016. There has been a reported increase in the number of non-state armed groups issuing public statements and command orders issued by armed groups prohibiting the recruitment and use of children. The global Arms Trade Treaty adopted by the General Assembly in April 2013 is aimed at keeping armed groups from acquiring arms and ammunition. Many experimental pilot initiatives are being trialled on the ground across countries to address psycho-social harms caused by conflict on children and their families and to support reintegration and regeneration.

These are all important steps to begin to ensure that all parties to conflict recognise the importance of keeping children out of harm’s way. Yet protecting children in all the different ways required fundamentally requires conflicts to end and long-term measures to be put in place to reduce inequality, promote human security and human development. The world has a long way to go to ensure that the horror in Peshawar is not repeated. 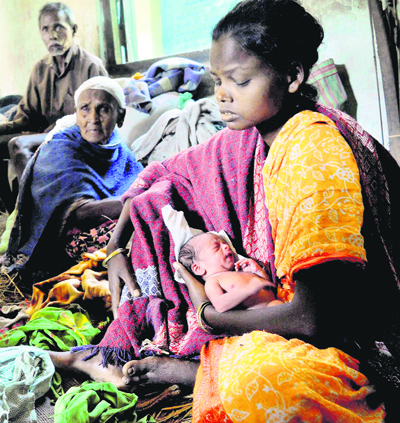 A mother & child in a relief camp in Assam

India’s own internal conflict zones reflect many of the hazards faced by children elsewhere in situations of armed conflict. The Asian Human Rights Centre (2013) in its shadow report to the Convention on the Rights of the Child committee states, a total 197 out of the country’s 640 districts remain officially designated as “disturbed” under the Armed Forces Special Powers Act (AFSPA), 1958, and as Left-wing extremism affected. Within many of these, children have been recruited mostly by armed opposition groups, though there are instances where state police forces have also recruited boys under 18. The report estimates that at least 3,000 children —- about 500 in North-East India and Jammu and Kashmir and about 2,500 in the Left-wing extremism affected areas —are involved in conflict. However, as the report also notes, the Government’s refusal to name these conflict zones as such severely hampers the ability of civil society groups to monitor the situation of children involved in these conflicts. Estimates of impacts on children and their families are based on a few studies which can be, and often are, conveniently ignored. A report for the National Commission for the Protection of Child Rights in 2008 draws on field visits to Dantewada district of Chhattisgarh, where the impact of conflict on schools and on ‘conflict’ “children left behind by parents fleeing the bullets and explosives of an undeclared civil war” — are clearly documented. Instances where schools have been taken over by the CRPF for use as barracks were also recorded — with children being made to sleep on the floor of nearby school buildings in a “pitiable condition”. Such field-based insights are invaluable snapshots into the undocumented and severely underestimated toll that conflict takes on children’s lives. Children are often pushed out of school and into work outside affected districts and villages in their efforts to seek greater security. This has led to child out-migration and worse still, the suggestion of active trafficking of girls as domestic workers or into the sex trade. UNODC estimates suggest that over 3,000 children were trafficked out of Chhattisgarh in 2013. In a 2013 report on Juvenile Justice in conflict situations, the Asian Centre for Human Rights also points out that 151 of the 197 conflict-affected districts in India lack Observation Homes and Special Homes, implying that under-18 year olds are likely to be taken into custody in either police, military or paramilitary centres, in violation of their rights. Efforts to understand conflict within the broader framework of social justice are imperative to lead to lasting reductions in armed conflict in India. For instance, a report to the Planning Commission in 2008 on “Development challenges in extremist-affected areas”notes that “…While not condoning the radical violence, an honest response to it must, therefore, begin by ameliorating the structural violence in the society.” Such a response must, however, be based on rigorous assessments of the impact on conflict on children across the country, in the NE states, J&K, as well as Central India. A report by the National Commission for Child Rights’ fact-finding mission to Chhattisgarh in 2007, summarises its findings and recommendations: “We feel that with conscious effort in the direction of protecting children and their rights there is a window of hope in harmonising the society. Giving every child an access to education up to Class X and investing in providing all that is necessary to make education happen, we feel can ensure a secure freedom for these children and their families and deepen democracy”.

This article was originally published in the Tribune on February 23, 2015